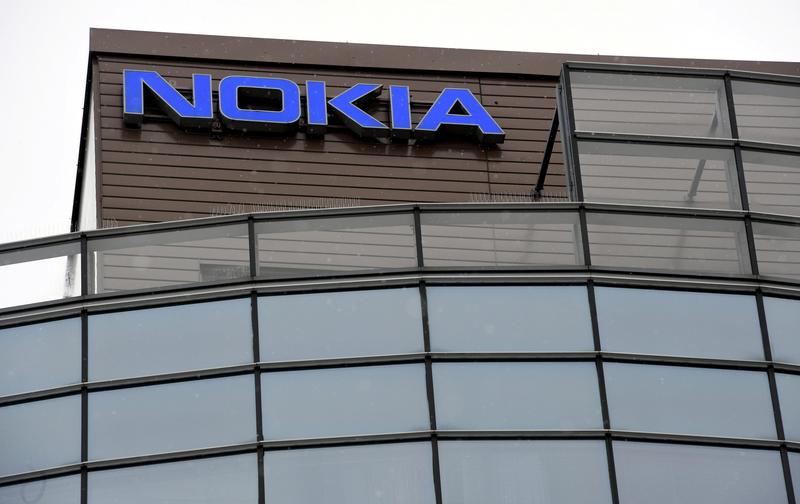 STOCKHOLM (Reuters) -Nokia’s new strategy showed early signs of bearing fruit on Thursday, with higher first-quarter sales of network and 5G equipment sending its shares soaring as much as 16%.

Finland’s Nokia and Swedish rival Ericsson have been winning customers as telecom operators start rolling out 5G networks and China’s Huawei faces curbs from a growing number of governments over security concerns.

“This year we are seeing great demand in 5G and also in what we call network infrastructure which is basically fiber connections to homes and offices,” Chief Executive Pekka Lundmark said in an interview.

After taking the top job last year, Lundmark has streamlined Nokia’s operation, cut jobs, and made changes to recover from product missteps under previous management that hit the company’s 5G ambitions and share price.

“These are a solid set of results and a good start to the year for Nokia,” said Richard Webb, an analyst at CCS Insight. “In particular the operating margin of 11% looks healthy and shows that the restructuring is having some positive impact.”

“We expect our typical quarterly earnings seasonality to be less pronounced in 2021,” Lundmark said.

The demand for infrastructure, boosted by the pandemic, is now spread out through the year, easing seasonality, which previously resulted in outsized growth in the fourth quarter.

Growth in the second half of year will take a hit from one North American customer, the company said. Last year, Nokia lost a part of a contract with Verizon after Samsung unexpectedly here landed a $6 billion deal.

“We are able to mitigate a lot of the impact of North American market share, but this is not something that will happen in one or two quarters,” Lundmark said on a conference call.

“This was supposed to be the bad year, but now it got off to a good start … the market clearly now believes in Nokia’s goals more than before and maybe even sees them as somewhat conservative because the Q1 was so strong,” said OP Markets analyst Kimmo Stenvall.

Reporting by Supantha Mukherjee in Stockholm and Essi Lehto in Helsinki. Editing by Jane Merriman and Mark Potter